This card features a Belted Galloway a heritage breed of cow originating from the west side of southern Scotland adapted to living on poor upland pastures and windswept moorlands in the region. I first saw a Belted Galloway in the Lake District at Yewtree farm which was originally owned by Beatrix Potter during the 1930's. You can't mistake a Belted Galloway with the distinguishable white band around their middle. 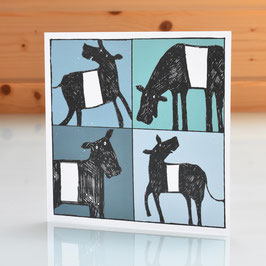 Cards can be ordered individually or in discounted multipacks. All cards are deliberately left blank inside so that you can add your own message.