Hey bear was created and inspired by the television programme 'The Bear Family and Me'. Gordon Buchanan spends most of his time calling the family of bears while out in the forest by using the phrase 'Hey Bear'. This bear is checking out his calls from with the silver birch trees. Gordon's gentle approach to communicating with these beautiful creatures won his trust with them and allowed him to get close enough to film them during the seasons of Spring, Summer and Autumn. 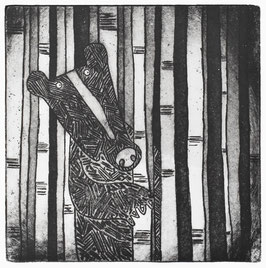